Starting in 1980 Breston received an order for the production of a weighing installation on a pontoon boat. Breston received the entire construction contract of the installation. This was commissioned and executed in close consultation with the end-customer and various suppliers.

The installation consists of a receiving funnel with an opening of 8.400 x 8.400 mm. The top part consists of a dust control section with a dust grid and 8 dust filter units, this grid is provided with the flex flap system developed by Breston. This special dust grid makes sure that the funnel keeps the dust trapped in the funnel after releasing a charge. This means there is less suction capacity required to keep the funnel dust-free. The funnel is also provided with a bulk waste grid which is constructed so robustly that hits from the grabber give no major damage.

At the top of the funnel there’s a movable mobile cover which can close the funnel completely. There is a weighing section placed in the receiving bunker located with a capacity of 1350 kilograms per hour. Under the weighing section there is a bunker with a conveyor belt relief cap and dosage slider which loads the conveyor belt. The dosing slider is also completely covered and provided with a dust filter unit which collects the dust from the loading funnel. After this process, the dosing slider dumps the product onto a telescopic swerve belt. This belt is also provided with filter units that extract the last remaining dust from the transfer points and the movable discharge pipe.

From the cabin, in which the computer of the scale, kitchen block, shower, toilet, air conditioner, etc. are located, there also is a control room. From this position the driver can shift the vessels with the help of the winches that are located on the deck. From here he operates the telescopic conveyor belt, the movable discharge pipe and the scale.

The whole installation is mounted on a pontoon in order to stay mobile. The ship is then emptied by a floating crane. The crane then lowers the charge into the funnel and opens the grabber. The product is then reliably weighed and transported to inland vessel and coasters. This method of emptying ships has a huge benefit compared to the conventional methods, such as sucking the product through the funnel, which increases the capacity immensely. The energy used this way is much lower, environmentally friendlier and less personnel is needed to run this installation. 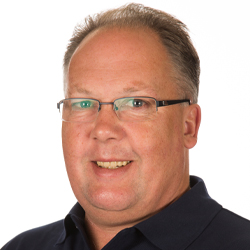